The legal status of cryptocurrencies varies from country to country. here we list all the major countries that made crypto legal, illegal or unregulated (with some restrictions).

In 2018, Algeria passed a financial law making all cryptocurrency transactions illegal. this includes holding and trading any digital assets. any violation of the law is typified as a crime and is punishable.

In 2014, Bolivia made cryptocurrencies illegal. Bolivia’s central bank issued a resolution that banned crypto, rather than cases of rug theft and scams costing investors a fortune. According to the Bolivian government, cryptocurrencies should not be trusted as an investment.

China’s central bank in September 2021, made all crypto-related transactions illegal and banned everything, sending the strongest signal yet of its determination to crack down on the industry.

All cryptocurrencies, including bitcoin and tether, are not fiat currency and cannot circulate in the market, the people’s bank of china said on its website. “all crypto-related transactions, including services provided by overseas exchanges to domestic residents, are illicit financial activities,” the pboc said in the statement.

Cuba is the last country to authorize and regulate cryptocurrencies like bitcoin.

Egypt has classified cryptocurrencies such as bitcoin as prohibited under Islamic law. Dar al-ifta, the country’s main Islamic advisory body, issued a religious decree in 2018.

the country 2020, toughened banking laws in September 2020 to prevent the trading or promotion of cryptocurrencies without a license from the central bank.

the european union has not made the use of crypto legal or illegal. recognizes bitcoin and other digital assets as “crypto assets.”

Meanwhile, European Union (EU) lawmakers are tightening the rules on the transfer of cryptocurrencies, in light of the growing use of crypto assets for money laundering. According to Reuters, the new proposal will oblige cryptocurrency companies, such as exchanges operating across the EU, to obtain, hold and send information about any of their users involved in any transfer.

The proposals aim to extend the anti-money laundering (aml) requirement, a rule already applicable in the conventional payment space. this would make it necessary for cryptocurrency exchanges to report to the authorities if any transactions are made above 1000 euros (1100 usd).

In 2018, the Indonesian central bank issued new regulations prohibiting the use of cryptocurrencies, including bitcoin, as a means of payment.

the crypto industry in iran is unregulated, the central bank of iran (cbi) in april 2021 authorized domestic banks and money exchangers to use locally mined and licensed cryptocurrencies to pay for imports to the sanctioned nation.

Notably, around 4.5% of the world’s bitcoin mining takes place in Iran, which according to blockchain analytics firm elliptic.

See also: How to Buy Bitcoin in an IRA: Rules, Benefits, Risks, and Where to Buy

India has imposed a 30% tax on crypto investors and a 1% tds on all internal crypto traders. India currently has not regulated cryptocurrencies, but will not legalize them either.

The country is “fairly ready” with its consultation paper on cryptocurrencies and has consulted national and institutional stakeholders, including the world bank and the international monetary fund, the secretary for economic affairs said , ajay seth.

In January 2022, the central bank of Russia proposed to ban the use and mining of cryptocurrencies on Russian territory, citing threats to financial stability, the well-being of citizens and their monetary policy sovereignty .

The move is the latest in a global crackdown on cryptocurrencies, as governments from Asia to the United States fear that highly volatile, privately operated digital currencies could undermine their control of financial and monetary systems.

Russia has argued for years against cryptocurrencies, saying they could be used for money laundering or to finance terrorism. However, Russia’s leaders are using cryptocurrenciesto circumvent sanctions imposed by the United States and its allies after Russia’s invasion of Ukraine, blockchain analytics firm Elliptic said. the research firm has tracked down a Russian crypto wallet that has “significant asset holdings”.

in april 2021, the central bank of the republic of turkey issued a regulation that prohibits the use of cryptocurrencies in all its forms, directly or indirectly.

Cryptocurrencies are legal in the United States. according to the usa Department of the Treasury Financial Crimes Enforcement Network (FINCEN), Bitcoin is a convertible currency with a value equivalent to real currency or that can act as a substitute for real currency. the internal revenue service has also classified bitcoin as property for tax purposes.

See also: In Crypto: Cryptocurrencies are worthless and founded on nothing 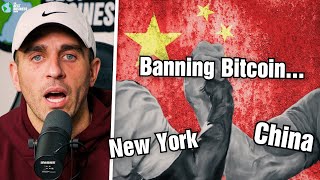