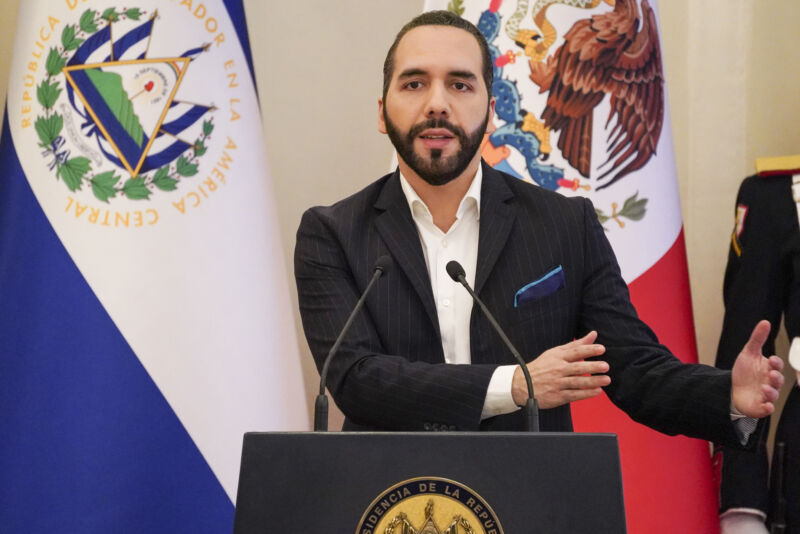 the price of bitcoin has tumbled in recent days, briefly dipping below $30,000 on Monday night and again on Wednesday morning. nayib bukele, the president of el salvador who pushes bitcoin, sees bitcoin’s low price as a buying opportunity. He announced on Monday that El Salvador had bought another 500 bitcoins. with a bitcoin valued at around $31,000, this represented a bet of $15.5 million.

bukele has made the embrace of bitcoin a signature of his presidency. Last year, El Salvador became the first nation in the world to make Bitcoin legal tender alongside the US dollar. In an effort to encourage bitcoin adoption, El Salvador launched a wallet software called Chivo and offered Salvadorans $30 if they tried.

Bloomberg estimates that El Salvador has amassed a total of 2,301 bitcoins since he started buying them last September. most were bought at prices above $45,000, which is why this nation of 6 million people has lost tens of millions of dollars speculating in bitcoin.

El Salvador’s government is heavily indebted and has an $800 million debt payment due in January. Last week, Moody’s credit rating agency downgraded El Salvador’s debt rating, warning that the Central American nation could be forced to default. The country reports that Salvadoran bonds are trading at around 40 percent of face value, a sign that traders see this as a serious risk.

el salvador’s bitcoin experiment has worsened the country’s already precarious financial situation. That’s not just because Bukele has invested tens of millions of dollars in the volatile cryptocurrency. It has also damaged Bukele’s relationship with the International Monetary Fund, which is currently considering offering El Salvador a $1.3 billion line of credit.

In January, the IMF recommended that El Salvador liquidate its bitcoin holdings to shore up its fragile balance sheet. Bukele’s government reacted angrily, and Finance Minister Alejandro Zelaya declared that “no international body is going to force us to do anything, nothing at all.” the price of bitcoin has fallen about 17 percent since the imf made its recommendation.

bukele is also pushing plans to build a new “bitcoin city” in the shadow of el salvador’s conchagua volcano. the idea would be to create a global hub for cryptocurrency users and entrepreneurs, all powered by geothermal energy from the volcano. On Monday, Bukele tweeted photos of himself checking out a scale model of the planned metropolis.

To boost the project, bukele plans to sell $1 billion in “bitcoin bonds”. In an unusual financial arrangement, half of the proceeds would be invested in bitcoin, while the other half would be spent on infrastructure projects for the new city. if bitcoins gain value over the 10-year life of the bond, bond investors would get half of the gains.

Critics pointed out that this arrangement makes little sense, since people who want to invest in bitcoin can invest directly in bitcoin and get 100 percent of the profits. but bukele has the novelty of the bonds, which are scheduled to be tokenized and sold on a blockchain, to attract investors.

These bonds were initially scheduled to be presented in March. But that month the government postponed debt issuance, citing economic turmoil caused by Russia’s invasion of Ukraine. El Salvador’s finance minister said the bonds would be introduced no later than September.

But if the salvager does not improve its financial position, it may become increasingly difficult to issue debt of any kind, as investors will be concerned about the risk of imminent default.

Bitcoin Could Become the Currency of Global Trade, Citi Says